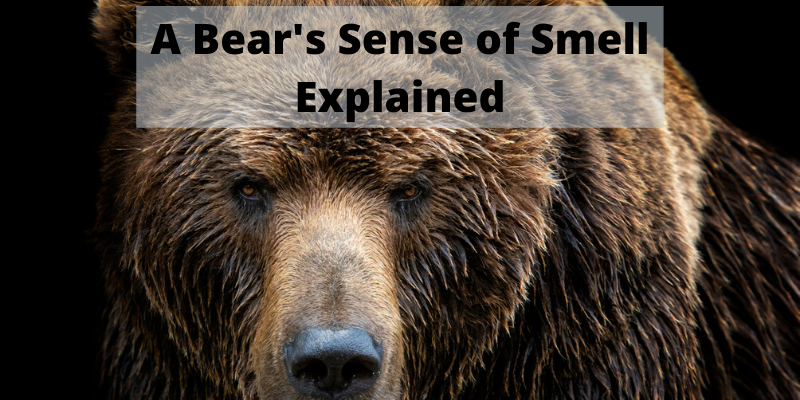 Bears have one of the best noses in the animal kingdom. But how good? In this article, we will tell you, and help explain why it’s so good.

When hiking in the backcountry, the last thing you want to think about is if the mammal with mandibles the size of your head, lurking unseen in the trees, is enticed by the smell of your trail mix.

Before we continue, you may want to check out our guide on hiking or camping in bear country.

Sense of Smell of Bears vs. Dogs vs. Humans – Who has the best nose?

Bear’s Sense of Smell Vs. Humans

What makes their sense of smell so acute?

A bear’s sense of smell is so excellent due to a couple reasons, one of which is an enormous olfactory bulb. This is the small organ that sits in your forehead, behind your eyes, and interprets the odors your nose is encountering. A bear’s olfactory bulb is more like an olfactory balloon: five times the size of a human’s.

Additionally, a bear’s nose is simply bigger than a dog’s or a human’s. That means more surface area to collect scents.

Why is a bear’s sense of smell so good?

Bears are a foraging carnivore, meaning they would much rather find food, than hunt it. A keen sense of smell allows bears to identify prey through odor much more effectively than other senses.

They have adapted over time to be some of the most effective foragers in the animal kingdom. A greater sense of smell allows them to expend less energy in search of food, because they know exactly where to go.

If you are interested in how the nose plays into olfactory foragers like bears, we encourage you to check out this study on nature.com.

What affects a bear’s sense of smell?

While the sensitivity of a bear’s nose would lead us to think they should be able to smell you from miles away (and they often can) wind direction could make it easy for you to accidentally ambush an otherwise occupied bear.

Your scent is essentially a vaporized chemical floating in the air. For a bear to smell you, they must make contact with the mucus membrane of their nose. The chemicals could be far away if you’re downwind from a bear on a breezy day. Be sure to think about this when hiking, and make extra noise on windy days.

A bear will be able to smell you more intensely if you’re hiking on one of those really sticky, sweaty days. When conditions are humid, there are more water particles in the air, and thus more vessels for those chemicals to bind to in order to be transported. You still may be stinky in dry environments, but your scent simply doesn’t travel as effectively from you because it has less water particle vehicles.

If you spend a lot of times outdoors through the seasons, you know that smells are more intense in the spring and summer as opposed to the winter. As temperatures rise, odor molecules move more quickly, and are more likely to become airborne and be sent off for a bear to sniff. At higher temperatures, water is more likely to turn to vapor and create those vehicles for odor molecules. Thus, a bear’s sense of smell will often be more acute at higher temperatures.

Things just smell different depending on temperature. Ever wonder why you feel like you can smell the cold?

Are there particular scents that can attract a bear?

Carrying odorous food is the most obvious way to pique a bear’s curiosity. Keep the gorgonzola at home.

While you might think wearing your flowery deodorant or scented soap is simply being kind to your adventure mates, these could be the very things that result in your friends’ untimely death. Perfume will attract bears to you. Just embrace the smell of nature and be sure your friends do the same.

Likewise, you might fancy yourself one of the dominant members of the animal kingdom while camping in the backcountry and reckon peeing around your campsite will surely mark your territory and deter bears, wolves, and feral dogs. You’d be incorrect. Be sure to do your numbers one and two far away from your camp, as those scents will attract unwelcome visitors.

Let’s say you haven’t listened to any of the above advice in how to manage a bear’s nose in the best interest of your safety. You round a corner, and there’s a sow and two tiny cubs. Your heart rate quickens, you start to perspire. You think to yourself, can she smell my fear?

In short, yes she can probably smell your fear sweats. But that doesn’t mean she’s any more likely to charge at you. Most people are afraid when they stumble on a bear, unless they’re insane. Yet most people aren’t attacked, even when they startle the animal. It’s more likely they’re scared of you.

Can a Bear Tell You Are On Your Period?

The conjecture that bears are attracted to menstrual blood has never been conclusively proven with black bears or grizzly bears. There is evidence that polar bears respond to menstrual products, but researchers conclude it is indeed the products, not the blood, that elicit the behavior. Thus, for the menstruating ladies, consider a menstrual cup or disposing of products in an airtight bag in the event you are hiking in polar bear territory.

How does bear spray factor to a bear’s extra-sensitive nose?

A bear’s extra-sensitive nose is why we are advised to carry bear spray as an effective deterrent in the event of an attack. A strobe light or air horn as a means of detracting a charging bear is much less effective, to which the author can attest.

The best bear spray should contain 1-2 percent capsaicin, one of the components of chili peppers that causes pain and heat. Imagine eight ounces of the most fiery chili peppers blasted into your eyes and nostrils while running full speed into a liquified version of them, and you can understand the effectiveness of bear spray. Now imagine your nose is thousands of times more sensitive than it is.

While a bear’s sense of smell is far superior to a human’s, we can certainly coexist peacefully while hiking and camping in the backcountry given the right preparations and caution. Remember, the bears, and their noses, make this place their home. Take your scents off at the door.

0 (0 votes)
About the author: Monica Nigon

Monica is a writer and outdoor enthusiast based out of Buena Vista, Colorado. Originally from Minnesota, she grew up exploring the rivers, lakes, and woods of the north. She's since traveled all over the world in pursuit of outdoor adventures, from Nicaragua to New Zealand, but her favorite place remains the 14,000 foot peaks and Class IV whitewater in her backyard. When not writing, you can find Monica taking whippers at the local crag, going over the handlebars of her mountain bike, or tomahawking under the lift line. 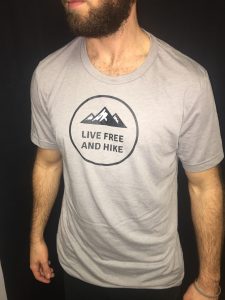