From the open summit of Mount Jackson, you can see all of the southern presidentials and Mount Washington.  Look to your east for views of the Dry River Wilderness along with Mount Isolation (4003’). 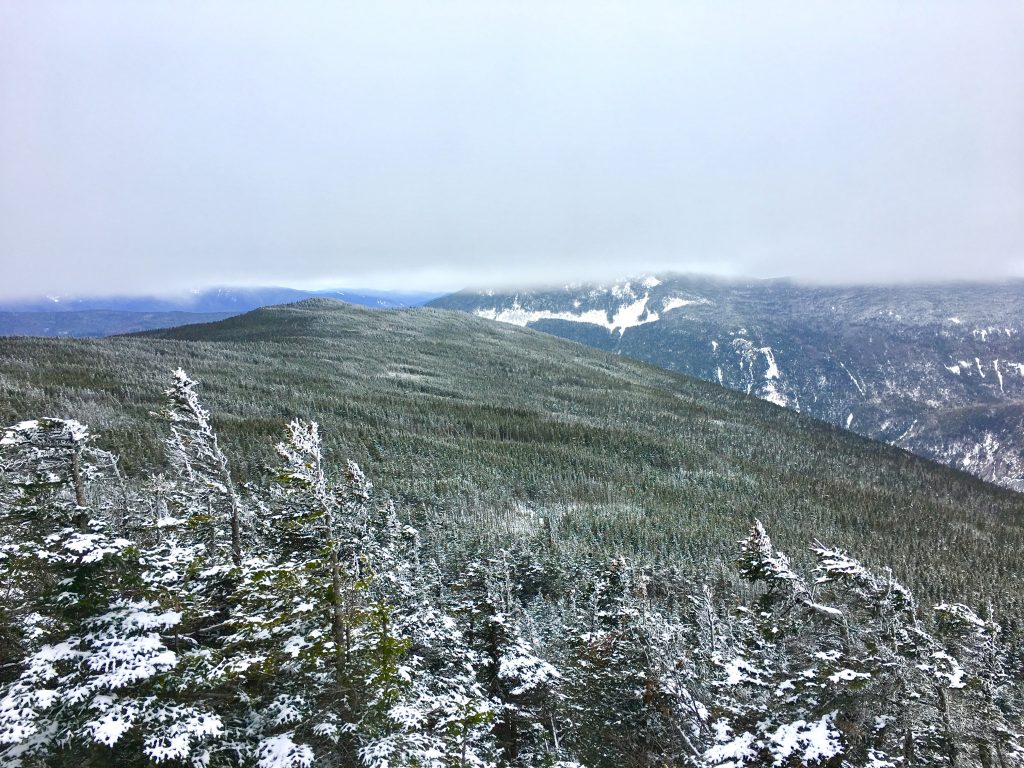 The Webster-Jackson Trail is moderate in elevation gain, rocky, and easy to follow. There’s a well-beaten path to the summit, the trail is well marked, and there is only one major water crossing.  The final few feet of the Jackson branch is along a rock slab that is marked with cairns. There is a col where Silver Cascade descends through the Webster branch of the trail and will require the hiker to descend and then reascend less than 100 feet of elevation in both directions.  A beautiful waterfall is located in the col and it’s worth stopping at for a short break.

Summer versus Winter Ascent of Jackson and Webster

The Jackson-Webster Loop is the perfect hike for someone beginning to work on the 4000 footers of New Hampshire.  The beauty of this hike is that it is doable in all seasons, with the correct gear.

In the winter, once there is a decent amount of snow on the ground, it’s more common to hike Jackson only. However, the final section of trail, right before the summit of Mount Jackson, is often covered in ice and will require traction.  The Webster Cliff Trail between the two summits may not be as well packed in winter and it’s important to pay attention to trail conditions posted online to determine what gear to bring. As long as you carry proper gear and check current trail and weather conditions, this is a very doable and enjoyable hike in winter.

Overall, the Webster-Jackson Loop is a very enjoyable and easy/moderate hike.  The views are spectacular, it’s located right near the AMC Highland Center, and is a great hike to start off your journey towards completing the forty-eight 4000 footers of New Hampshire.

There is a small set of parking across the road from the trailhead, which can get filled up on busy days. You can also park at the train station a few hundred feet up the road.

Tonight
A slight chance of snow showers between 8pm and 10pm. Mostly cloudy, with a low around 20. Northwest wind 15 to 20 mph. Chance of precipitation is 20%.

Wednesday
Mostly cloudy, with a high near 33. Southwest wind 15 to 20 mph.

Wednesday Night
A slight chance of snow showers after 2am. Mostly cloudy, with a low around 30. West wind 20 to 25 mph.

Thursday
A chance of snow showers after 2pm. Mostly cloudy, with a high near 35. Northwest wind 25 to 30 mph. Chance of precipitation is 40%.

Thursday Night
A chance of snow showers before 8pm, then a chance of snow. Cloudy, with a low around 21. North wind 15 to 25 mph. Chance of precipitation is 50%. New snow accumulation of 1 to 3 inches possible.

Friday
A chance of snow before 2pm, then a chance of snow showers. Partly sunny, with a high near 25. Chance of precipitation is 50%. New snow accumulation of 2 to 4 inches possible.

Friday Night
A chance of snow showers before 8pm. Partly cloudy, with a low around 15. New snow accumulation of less than one inch possible.

Rebecca ‘Socked In’ Sperry has completed the NH48 4000 footers and is more than halfway through her second round completing the list. She has completed 99% of her hikes solo and is in her second full season of hiking. She has completed several hikes in winter, a single-day Bonds traverse, and a single day Northern Presidential traverse. She is also a White Mountain National Forest volunteer trail adopter and writes for The Trek (thetrek.co). She is hoping to complete a southbound thru-hike of the Cohos Trail this summer. You can follow her on Instagram (@sockedinhikes) or on her Facebook page (Rebecca Sperry).